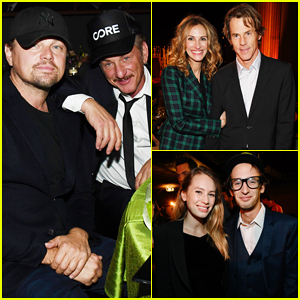 Leonardo DiCaprio keeps it cool as he poses alongside Sean Penn while attending the 2020 CORE Gala: A Gala Dinner to Benefit CORE and 10 Years of Life-Saving Work Across Haiti & Around the World held at Wiltern Theatre on Wednesday (January 15) in Los Angeles.

The Oscar-winning actors were also joined by Sean‘s girlfriend Leila George, as well as his children Dylan and Hopper Penn as they supported the work of CORE: Community Organized Relief Effort, formerly known as J/P Haitian Relief Organization.

$5 million was raised for CORE and its disaster relief and preparedness work across the world, including Haiti, the Bahamas, the Caribbean, and right here in the US.